Confessions of a non-quilter 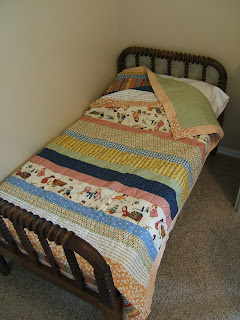 Well, it's finally done. After much difficulty, struggling, silent cursing and grinding of teeth, Hakan's new bed quilt is finished as of a few minutes ago. (Yes, his bed has been moved due to his bedtime window shenanigans.)
Confession #1: I am lazy.
Once I got all of the strips stitched together I went searching for an appropriate batting. I found this "fusible" type that I'd never heard of before and thought, "Brilliant! No pinning!" I snatched it up and took it home. I laid a fleece blanket on my rug to work on, since using my skinny ironing board didn't seem realistic and I didn't want to melt my carpet. Down next went the backing fabric, smoothed and perfect. Batting next, then the top. The directions on the batting package told me the iron setting and the direction to start ironing in, so off I went. Half an hour later I'd managed to get the top mostly adhered to the batting, but the backing was still loose. Grrr.... It said all 3 layers would fuse if ironed & steamed enough. Not so. Flipping seemed necessary. Over it all went, now with the backing face up. More ironing, on my knees, bent over this increasingly annoying quilt. I managed to get a few spots fused, but it just didn't want to stick. Finally, after about an hour, I realized that pinning was looking like my best option after all. Down to the dining room table I go, and after a good wipe down got the quilt laid out and pinned. Just like that! Should have done it that way in the first place. I guess that's what I get for trying to take a shortcut.
Confession #2: I am impatient.
Thinking that I've got all the layers pinned together well, I took the quilt back upstairs and laid it out on the floor to mark out my stitching lines. I was planning on using my machine, because a.) I've never learned how to hand stitch a quilt, and b.) it would take too dang long (see Confession #1). I drew vertical lines that go perpendicular to the strips, about 6" apart. Then, over to the machine to start. This, as it turns out, is waaaay more difficult than anticipated. First of all, trying to maneuver this quilt through my machine with both hands while trying to stitch a straight line was a nightmare. The bottom layer didn't want to stay put and things just kept getting all bunchy and askew. GRRR! Eventually I managed it, but after lots and lots of growling.
Confession #3: I thrive on instant gratification.
The fabric I bought for the binding was perfect and I was growing more and more excited to see the finished product. I wanted a wide binding, so I cut it so that it'd be 2". Stitch the pieces together, iron the whole thing in half lengthwise and I'm ready to roll. I decided to cut a straight grain binding instead of on the bias because I liked the pattern of the dots better that way. And this time, instead of just winging it like I've done in the past, I looked up an online tutorial on how to apply the binding to a quilt. Corners have always baffled me. I found one that seemed clear enough and started along. I followed the instructions to create a mitered corner precisely, and stitched around the entire quilt. It wasn't until I went to turn the binding to the other side that I discovered that my so-called mitered corners were anything but. There was a small pleat at each corner, but that was about it. The binding just kind of curved around each corner and didn't make anything even remotely resembling a squared corner. GGGRRRRR!!!!! I had to put the thing down for a couple of days until I could figure out what to do about it. 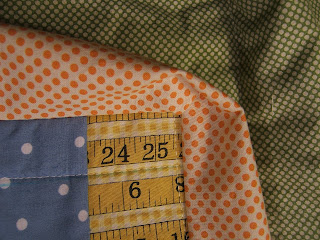 Confession #4: I like shortcuts and don't care if they're "the right way".
Instead of pulling out the stitching I'd just done clear around the whole quilt, I decided to do something else. I finished turning and stitching the binding, clipping the it almost to the stitching at each corner. I realize that this is where hand stitching would have made the binding look a lot neater because the stitches would be hidden, but, hey- have you been paying attenion to my Confessions? Also, this quilt is going to take a beating, so I really don't want to worry about my carefully hand sewn binding being ripped off at some point. Doesn't look that bad, does it? 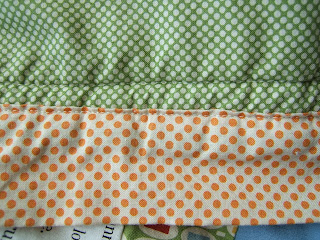 For the corners I cut 4 strips of the other orange fabric I used on the quilt and used them to cover the botched corners I'd attempted before. It ended up being a bit time-consuming, and they don't look super neat and tidy, but I think it's okay. 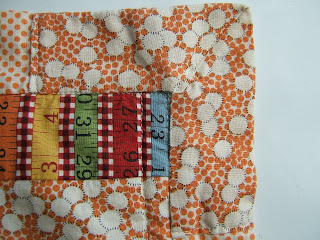 Confession #5: I feel exceeedingly satisfied when I finish a project.

Thankfully, all of the washable ink did wash out (which it sometimes doesn't), even the stains my iron left when the steam holes got drippy. I think it looks cute on Hakan's little bed. Now I need to start thinking about that pillowcase idea... Oh, and Pyper thinks now it's her turn for a new quilt. *groan* 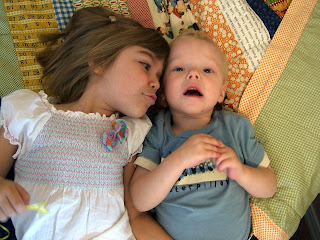 1st of all, it is a very striking quilt. Congrats!
Bindings will always round over like that if they are too wide. I like to make borders (I'd use your "binding" as an outer border.) Then cut a binding strip 2.5", fold it in half, sew it around the edges on the front side and your corners will be crisp. Then fold over, hand sew it to the back side. (Or, the lazy way is to sew the binding to the back of your quilt with sharp corners.. fold it over to the front and top stitch the front down.