Are you getting tired of these long, low dresser projects of mine? I hope not, because they're just going to keep coming! I really had some fun with this one.

I found this poor, pathetic dresser sitting outside a thrift store with a price tag on it that might as well have said, "FREE". The back legs of this guy had somehow been so damaged that they were a good inch shorter than the front ones, which caused the whole thing to slope backwards terribly. But I knew I could rescue it, so home it came.

While my parents were in town for a visit I enlisted my Dad's help and had him cut off all 4 of the legs, leaving me with a nice even base. 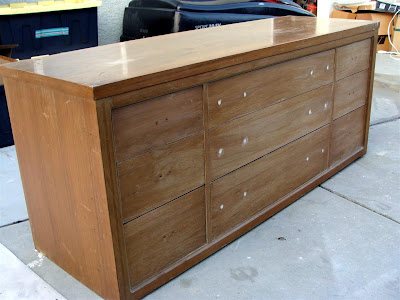 Next I got on eBay and found a set of replacement legs in the right height and shape (and price range) and waited semi-patiently for them to arrive.

I'd been doing a project for a friend using Annie Sloan chalk paint in Old White and decided to give it a go on this dresser, too. But knowing how plain and simple the style of the dresser was, I knew it needed something more than just a paint job. The Graphics Fairy provided me with a simple damask design, which I traced onto some of the drawers with my projector. 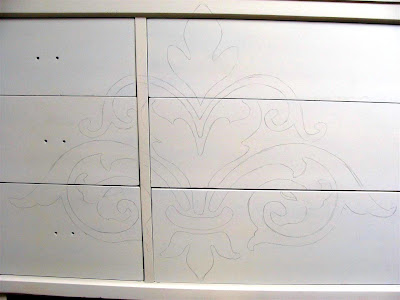 Next I used some antique gold Rub 'n Buff to fill in the damask. This was kind of tedious because Rub 'n Buff is rather thick and is kind of difficult to work with using a brush, but in the end I was glad I used it. I wasn't going for perfection, afterall, and it provided me with a nice metallic luster, which I was going for. 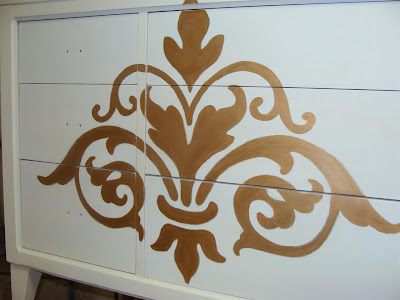 The smaller drawers kept their original hardware (remember the long ones I used on the last long dresser makeover?), but were given a thin layer of the same Rub 'n Buff to match the damask. 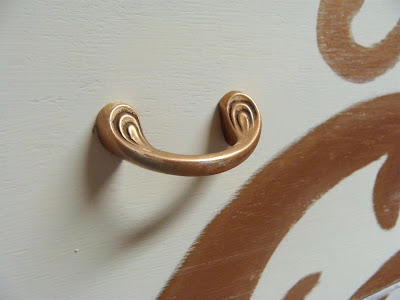 And here it is all done and set up in my space. 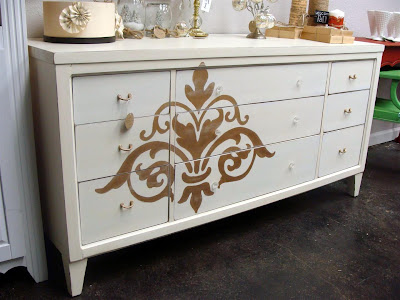 I added some clear glass knobs to the center drawers (from Hobby Lobby) for a little extra sparkle and distressed the whole thing to shabby it up a bit. 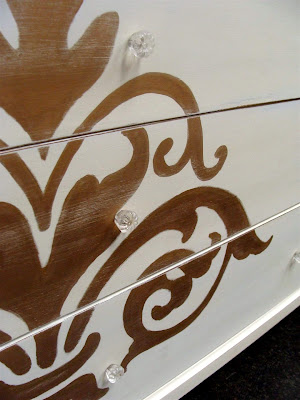 Did you notice some of my Christmas crafts on the top? I'll be giving you a closer look at those soon. 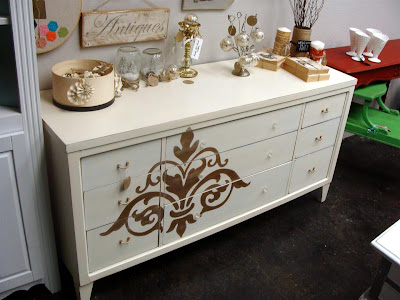 Thanks for visiting!
Posted by Sarah at 8:00 AM

Labels: before and after, furniture refinishing, painting, used furniture

Super cute!!! I love it and that design

Very cool! Thanks for using AMACO's Rub 'n Buff. I'm going to post this on our Facebook page and link back to your site.

I LOVE the gold! Super cute! I almost love it as much as I love your blog :)

Beautiful! It looks so majestic. I'm not brave enough to use a stencil yet. I'd love it if you'd share this at my Saturday Splendour Party at www.megandmums.com :)