By the time Finnley was 2 months old, he had pretty much outgrown all of his 0-3 month size bodysuits ("Onesies"). He measured a whopping 25" long at his 2 month check up, which put him in the 95th percentile for boys his age. This is all thanks to the long waist he inherited from yours truly. 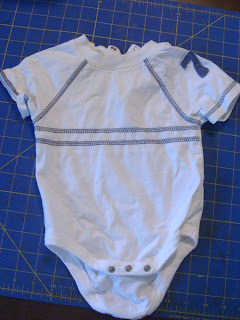 Using your straight edge and rotary cutter (or scissors if that's what you've got handy), cut off the bottom portion of the bodysuit just above the leg band. 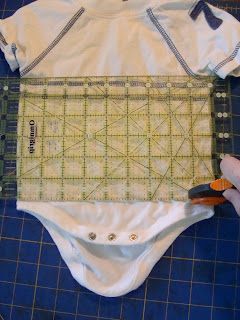 Then snip the front and back pieces apart at the side seams. 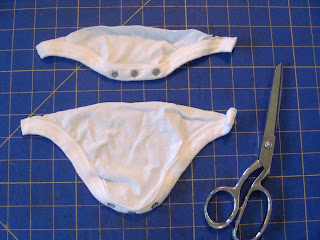 Next, trim off the "wings" on either side of the 2 pieces, about an inch away from the snaps. 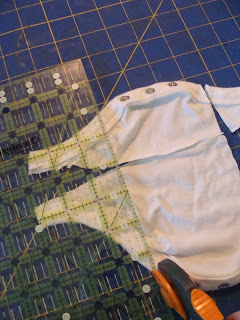 Not shown: You'll probably want to take off a couple of inches from the back piece now, otherwise your extender will be way too long. I think I cut enough off of mine so that the two pieces ended up being about the same length.

Sew the two pieces together using about a 1/4" seam allowance. *Make sure you place them together so that the snaps are facing up on both peices. 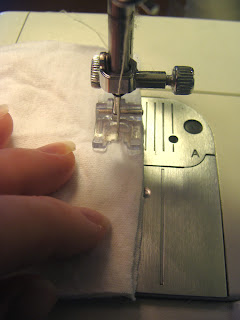 Next, stitch down the seam allowance towards the back piece (this has the stud/prong part of the snaps). 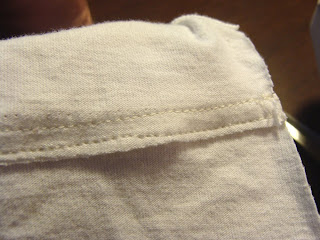 Last of all just finish off your edges. This is where I took a few shortcuts that led to the somewhat rough look of my finished product. If I wasn't so lazy I would have serged the edges, but I didn't feel like re-threading my serger with white thread instead of the pink that was on there. I also should have re-threaded my sewing machine with white instead of cream but, again, I'm L-A-Z-Y. Anyway, I just used a (kind of messy) zig-zag stitch. 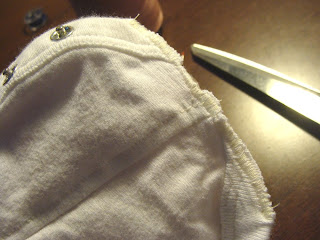 If you try this project you'll find that your extender may not work on all bodysuits, as not all snaps are created equal. But so far I've found it to work with at least two... 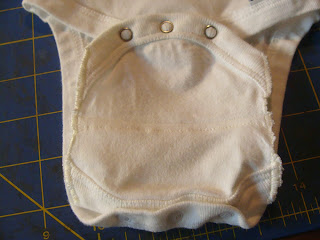 This tie Onesie I made Finnley got all of one use before he was too big. Next I think I'll have to shorten the sleeves and he'll be able to wear it for quite a bit longer. 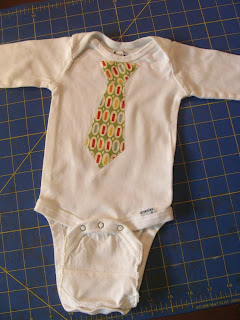 I really love this little mouse & acorn one. It's probably my favorite. 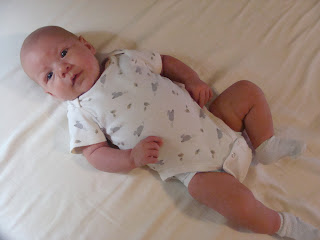 Doesn't he look happy with his new extender? :) 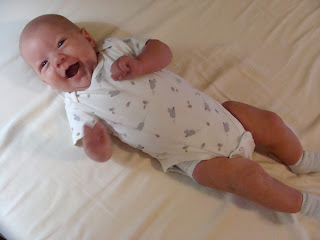 awesome! i got a 3pack of these from a cloth diapering store online (since cloth diapers make babies bums so big!) with three different snap sizes, but i am missing one & i never even thought of making them! so thanks for the tute.

Thanks for sharing this super helpful tutorial:) Featured it over at Hint Mama in a hint on 5 ways to extend the life of onesies - http://hintmama.com/2014/07/31/todays-hint-5-ways-to-extend-the-life-of-onesies/

I really appreciate on your post.... and I got an useful information about the matter... I just tried to write the same post.
Infant bodysuits