There's something about being wasteful that really bugs me. I've always appreciated hand-me-downs of anything- shoes, clothing, furniture, housewares- whatever! Thrift stores are my favorite places because I like knowing that the things in them were once used by someone else, and will now be used by me, too. I like giving second life to unwanted items.

Last night as my family and I were on our way home from a walk through the neighborhood, something poking out of a neighbor's trash can caught my eye. I paused, noticing the wood construction, and wondered what it was and what it was doing in the garbage. Our trash pick-up is on Monday morning, so most of the neighborhood's garbage was already out by the curb. I don't usually take such notice of refuse, but I couldn't seem to get it out of my head. This may sound silly, but hours later as I was lying in bed exhausted and ready to go to sleep, all I could think about was that thing I'd seen in the trash. Why would someone throw that away? What was it, anyway? Maybe it was broken, or otherwise ruined. Why else would it have been in the trash?

'Don't be ridiculous, it's after midnight! Aaron would think I'm out of my dang mind if I left now to pull something out of a stranger's garbage can.'

'But what if it's something nice? What if I could use it? It'd be free, after all.'

(to Aaron): "Is it illegal to take something out of some body's garbage once it's on the curb?"

So I did! I haven't been dumpster diving that often, so this was a little nerve-racking. Pulling up to a dark house on a still street, well past midnight. Trying to look casual as I approach an overflowing garbage can and swiftly remove this... item. Then I hustle it back to my car and drive away, ever so nonchalantly... sweating all the time. I walked proudly into the house with my prize and showed it off to hubby. I've decided that it's some sort of little bench or stool. Not quite sure. But there's nothing wrong with it other than a scuffed up top and some dust. For heaven's sake, why would it have just been chucked?! Take it to Goodwill, for crying out loud! So, so wasteful!! 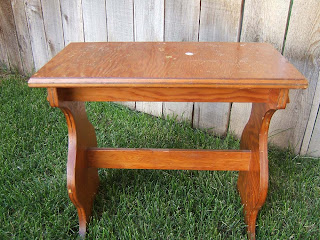 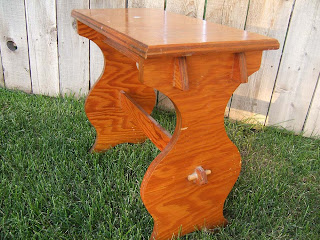 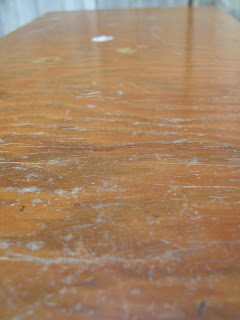 Anyway, since I don't really need another stool around, I decided to make it a little shelf above my printer for storing stuff. I was thinking of painting it, but now I'm not sure if I will. I thought it would look nice in a fun color, like a robin's egg blue or something. Whatever I end up doing with it, it will have a much nicer life with me than at the city dump where it was headed. Sheesh, can you believe some people? 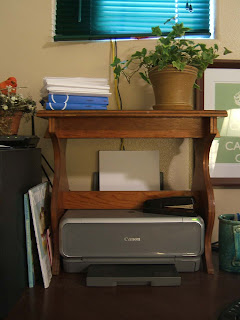 And for the record, Aaron didn't give me a hard time about my midnight scavenging. He knows me. :)
Posted by Sarah at 8:51 PM

Ooo, awesome score! I so would have been sneaking around in the dark rescuing that bench! Make sure you share if you paint it:)

Great find!
And I TOTALLY love thrift stores, too. After our last baby was born, the very first place I drove to (once I was allowed to drive again) was the thrift store!

i would laaaaaaugh my head off if that particular neighbor read this blog and was like "hmm that thing looks awfully familiar..."