I have a lot- and I mean a LOT- of these long, stretchy, comfy cap sleeve tees. I wear them all the time, year round. Recently I dug to the bottom of the pile in my drawer and found a gunmetal grey one that I haven't ever worn before. I bought it a few months ago, but just wasn't too thrilled with wearing grey during the summer. Then it occurred to me that it didn't have to be all grey, so I mulled over how I might beautify this plain tee. Applique? Embroidery? Both? Finally I decided to go with my favorite- embroidery. In my trusty "creativity" photo file on the computer I had just the thing- an image of a swallow I'd found online a while back. I printed the image, then carefully cut around the edge.

Next I pinned the bird in place onto my shirt. Behind that I pinned a square of heavy interfacing to keep the knit fabric of the shirt from stretching while I stitched. It was past midnight when I was doing this, and so engrossed was I in "Pride & Prejudice" that I just didn't take pictures of these steps. 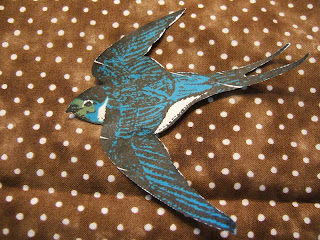 With my trusty Mark-B-Gone pen I traced around the outline of the bird. I considered adding some details to it, but in the end decided that I liked the look of just the plain silhouette.

I chose a pretty dusty blue thread that went well with the grey and plopped down on the couch to start stitching. I put one bird on my right shoulder, and another about halfway down the left side in back. 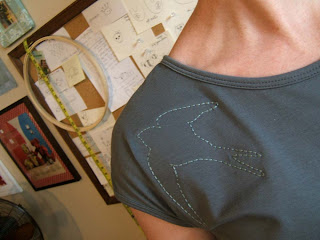 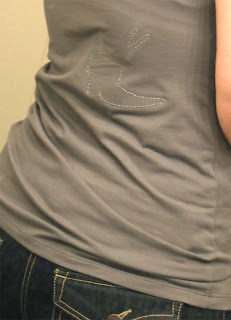 Once all the stitching was done I knotted my thread, buried the tails into the back side of the stitching, then (carefully!) trimmed away the excess interfacing. It's a little stiff right now, but I think with a few washes it will soften up some.

So, what d'ya think? I think I'm hooked. There are a few other tees in that drawer that I don't get much use out of, but I think with a little embellishment they might just see daylight a bit more often! 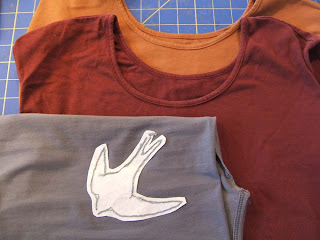 oooh do me next! haha