Okay, so here are a few more items from my handmade gifts list that I managed to make, finish and/or photograph this weekend.

First up is a canvas market tote that I made a few weeks ago. I actually made 4 but only got handles sewn onto 2 of them. I wasn't entirely sure who I was going to give them to when I made them, but they turned out to be good gifts for a couple of gals from church. There are lots of tote bag tutorials out there, but I basically just used a store-bought tote as a template for mine. The apple stamping idea came from Martha with this tutorial. 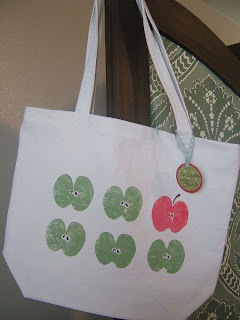 For some reason when I heat set the fabric paint it caused the red to lighten and kind of puff up. Weird. 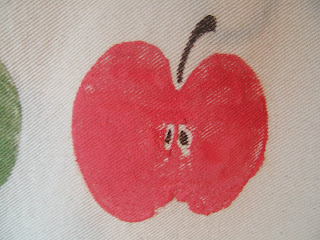 I mentioned in my previous post a jewelry-making kit that I was putting together for my daughter. Voila! Okay, nothing special, but I think she's gonna like it. Just a simple wooden box that I'd painted a few years ago and still had on hand, then I added a little cardboard divider to keep things inside neat and tidy. A bunch of colorful wooden beads and some craft yarn wound around an empty ribbon spool and she's got a box full of crafty fun! 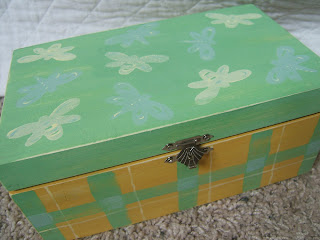 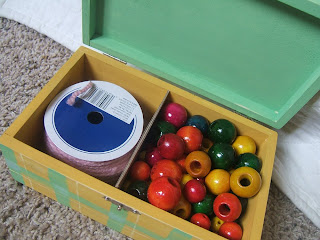 This little fella was kind of a spur of the moment creation. I had this tutorial from Craftster favorited in my "projects" file, so when I realized that daughter had more gifts on her side of the list than son did, I thought I'd give it a whirl, you know, to even things up. The only real trouble I ran into with this was that the underbelly sections didn't even come close to matching up with the body sections. I had to do a lot of finangling (that's a word, right?) in order to get them pinned together, and the outcome ended up being a little lumpy underneath. Then when I got him all stuffed, the legs kept wanting to splay out like he was doing a belly flop off the high dive and not standing up straight like I wanted. I'm thinking that if the underbelly hadn't been so wide it would've kept the legs in better. I did a little tucking underneath to pull it in a bit, but I'm not going to show you that. Just the cute parts. :) 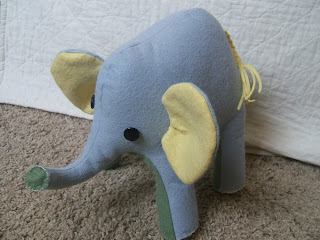 What do you think, is this too juvenile for a 2 1/2 year old? I'm wondering if I should stash him away for Baby Boy (due in March) and come up with something else for big brother? 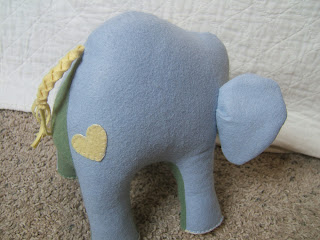 And finally, the felted sweater hat for big sister. Isn't that owl sooo cute? No, I didn't come up with him, either. He was an image that I'd saved in an inspiration folder on my computer, but now I don't remember where I got it. I like his round body and itty bitty feet and beak. (The hat was made using this tutorial.) 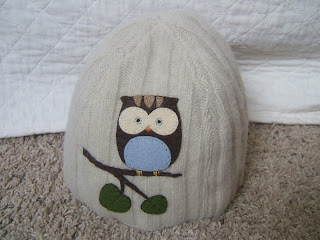 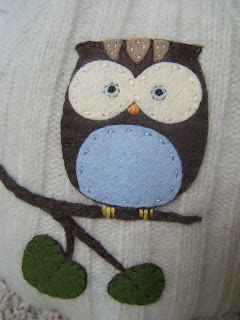 I'm relieved that I've almost crossed all the items off of my "to make" list, but it makes me kind of sad because I've really enjoyed it. As much as I like making shoes, it's such fun to be able to sit down with a brand new project that I've never tried before and see how it turns out. I've had such a good time making gifts this year. Hope you give it a try! Happy holidays everyone!!
Posted by Sarah at 12:42 PM

that elephant is sooo adorable! i would say to save it for the new baby, (thinking of my 2 1/2 year old) but that's hard! depends how many other cute ideas you have up your sleeve & if you get everything else done & want to keep going! that owl hat is adorable, too. how fun!

I wish that you could have been all up into this business when i was a kid. I saw that elephant and i'm like "Well heck... i want!" haha