My 5-year-old daughter loves to do "projects", and it's usually up to me to come up with them for her. She's very much an artist and loves to draw, write, color and paint. Recently, though, when she came to me for a project, I decided to see how she'd do with stitching. So I grabbed a scrap of canvas, a 5" embroidery hoop and some red floss. I drew a heart in the middle and then showed her how to do a basic running stitch. And off she went! She really loved it. She even woke up early from her nap that day because she was so excited to keep working on her "stitching". She only poked herself once or twice, and once she'd finished with the red outer heart she decided she wanted to add another heart inside that... and then another... and then a button! It took her a few days to finish, but once she was done she gave it to me and said I could do whatever I wanted with it. 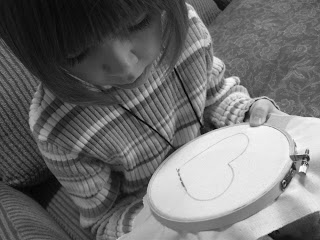 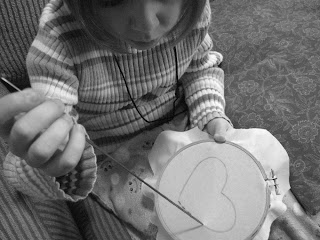 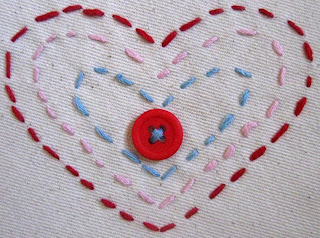 This morning I decided to turn it into a doorknob hanger. I cut the canvas into a circle, then another from some scrap polka dot fabric. I stitched some jumbo ric rac to the edge of the canvas then sandwiched that between the two circles and sewed them together, leaving a hole for turning. After stuffing some poly fill and a little dried lavender inside I added a scrap of ribbon that matched beautifully and sewed it closed by hand. It would've been nice if I could've thought of something useful to turn her first project into, but she's pleased with what I came up with, and so am I. 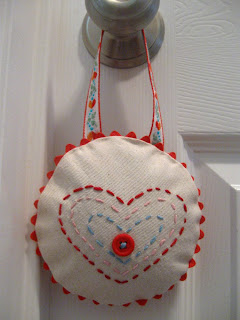 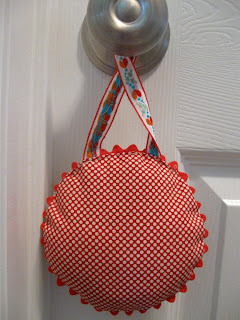 This next project was done in a hurry Saturday evening before we had to go out of town at the last minute for 4 days. I was to host a preschool Valentine's Day party on Thursday but we wouldn't be getting home until Wednesday afternoon, leaving me very little time for decorating. I'd seen this idea and thought it was lovely, but didn't want to take the time to paint. So out came the felt and in an hour or so I'd made several garlands of hearts to hang around my dining room. Super duper easy, just a little time consuming with the cutting. But even that went pretty quick because all I did was cut 4" strips of felt, iron them in half and then cut half-heart shapes along the fold all along the length of the strip. I then had to iron the hearts flat, but sewing them together was a breeze. You just want to try and keep some tension on the thread when you're between hearts by pulling it gently up and away behind your machine until you've fed the next heart in to be stitched. (Did that make any sense?) Anyway, I like the effect and it didn't cost me a thing. (Too bad the photos are awful. Sorry.) 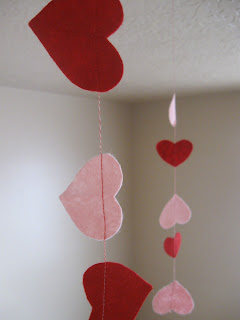 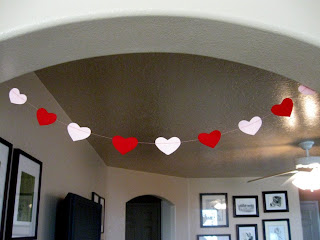 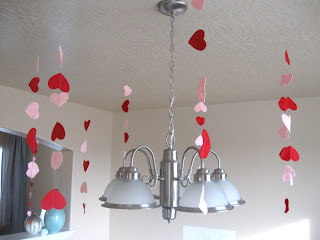 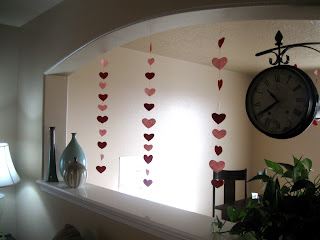 If you do this project, try different positions of the hearts along the string- all right side up; all sideways; alternating right side up and upside down; etc. I also think using white or cream would be really pretty.

Have fun and have a great Valentine's Day!

where do i start?!
your 5 year old still takes naps? your a l-u-c-k-y girl.
and if she can embroider, there's hope for me. she did such a great job & i can't believe how well she followed the first heart with the inside ones. she has great talent & taste like her mamma. wow. that's awesome. (and she is such a doll, btw)
okay, then the polka dot back & the ribbon! love it.
and.. i wasn't going to decorate or do anything for valentines day. yeah. now i know what we'll be doing tomorrow while daddy is at work! you're awesome. thanks for sharing!