A couple of "Afters" and the Simply Content Sale

As I was loading the truck with my stuff for the Simply Content sale yesterday, I realized there were a couple of things that I hadn't taken pictures of yet. I slowed down long enough to snap a photo of this pair of nightstands, though they don't have a "before" photo to go with them. Imagine them with blond wood and a pretty rough finish and dull, brassy drawer pulls. 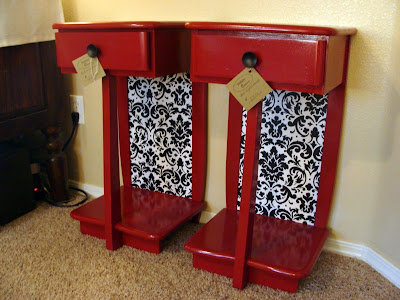 They begged for a bold color, and since I already had some glossy red that's what they got. Mustard yellow would've been cool, too. I applied some wrapping paper that I found at Hobby Lobby to the back panels and just painted the existing hardware with Oil Rubbed Bronze spray paint.

They make quite a statement now, don't they? 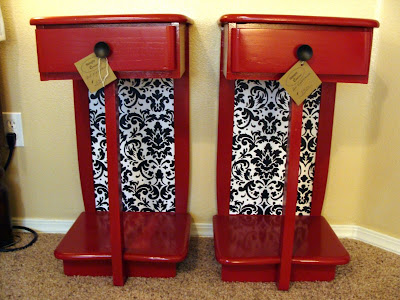 One of my biggest projects has been a dining room set that I assembled with some mismatched chairs and a big oak pedestal table that came with 2 leaves. Here are a couple of the chairs I used. 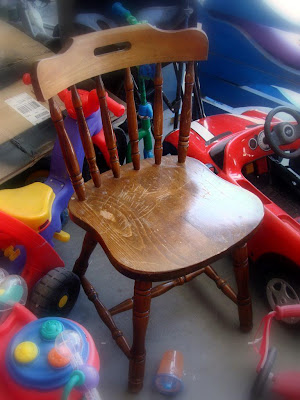 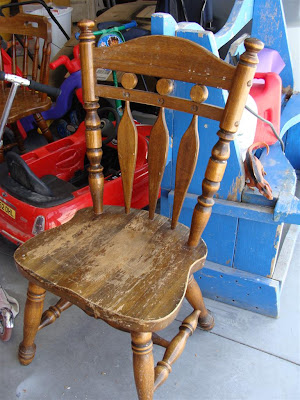 Unfortunately I didn't remember to take a before photo of the table, but here's an "in progress" photo of a bunch of projects I was working on earlier in the week, including the dining set. 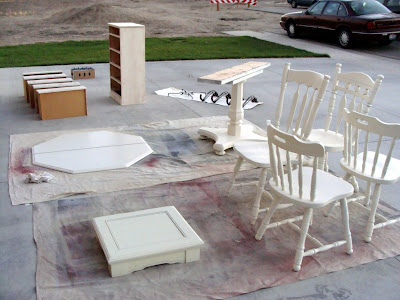 I visited the sale today before it began to take pictures of the rest of the things I'd forgotten, but they were all kind of buried under lots of other things. The two chairs on top of the table match, and the chairs on either side of the table are taller but mismatched. Everything was painted Heirloom White then distressed. 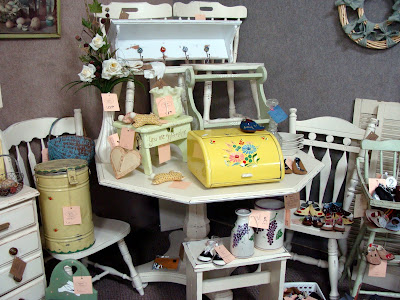 Here is a photo of part of the hall where the sale is being held. They'd stacked and organized and arranged everything so well, even though there was TONS of stuff. 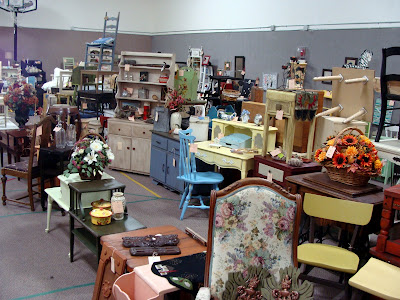 I got such a kick out of seeing my stuff displayed that I had to take a few pictures. 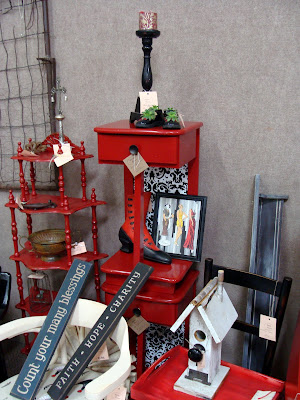 Those sterling salt & pepper shakers, the hand painted tin and the burlap-wrapped jar are mine... 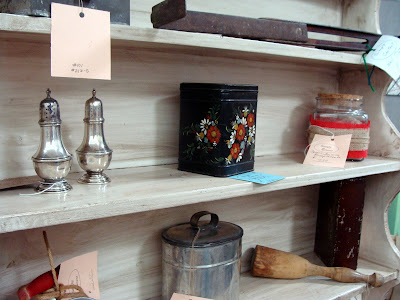 ...and almost everything on this hutch is mine as well. 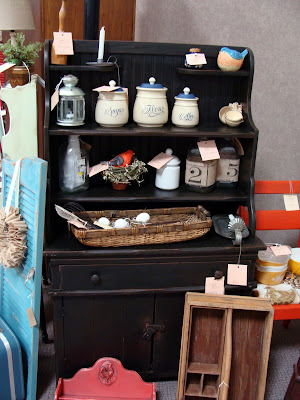 Then there's my very own hutch all prettied up with a lot of my knick knacks and accessories. 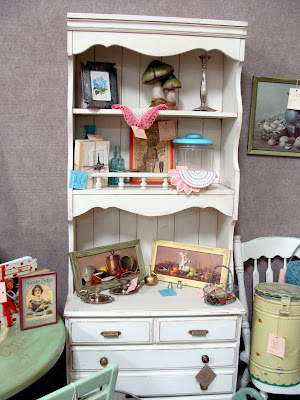 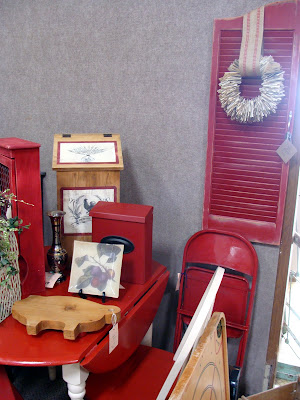 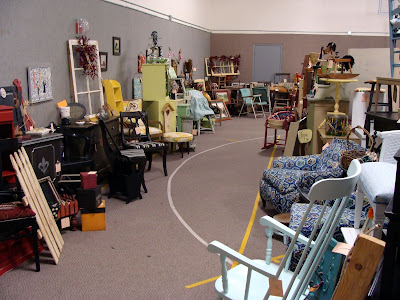 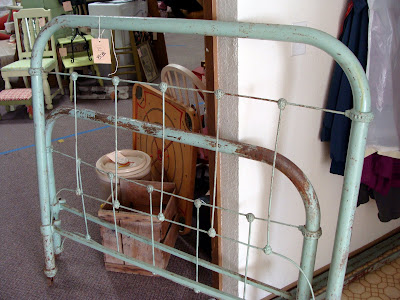 I loved the details and the shape and the chippy aqua paint and the rust and the wheels- everything about it was perfect. I came so close to buying it right off the bat but after I stopped panting and drooling, reason kicked in. (Dang that stupid reason!!)
A.) I don't need a full-sized bed,
B.) I wouldn't know how to explain the purchase to my husband except to say that I was in love with it,
C.) (most importantly) I didn't know how I'd get it home.

So I snapped the photo so I could drool later, said goodbye and walked away, and died a little inside. My friend who was there for the whole sale told me later that it was the first thing to sell.


I visited the sale again later in the evening and you could tell there was a lot missing, but I couldn't help but notice my items that were still there- specifically the BIG stuff. I can't help but fret because I really, REALLY don't want to have to rent another Uhaul just to bring things home. So I went around marking some things down and I'll just have to cross my fingers that they sell tomorrow. Otherwise I might have to hit up some friends with trucks for a favor.

Labels: before and after, furniture refinishing, thrifting, used furniture

So I saw you painted my kitchen chairs heirloom white and now I am inspired...
1) Did you sand first? (it would be hard to sand the curved chair back parts )
2) Did you prime? What kind?
3) Did you seal the paint with some kind of poly?