Last night I remembered that today is "Hawaiian Shirt Day" at my daughter's school, so at about 10:00 or so I decided that I needed to make her something to wear... which turned into a couple of somethings.

Let me first show you where I got the fabric for these projects.

I found this dress last June at a thrift store. While the style is pretty dated, I just couldn't walk away from that fabric. It's just so pretty and vibrant! 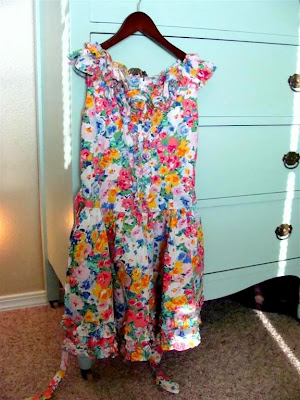 This dress was a little over the top. It had ruffles evvvvrywhere. Two along the neckline, two along the hem and one down the front. And then there were those weird rosettes. Do you see them? 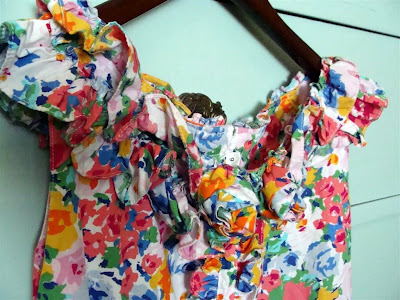 Right smack in the middle of the neckline. Weird. 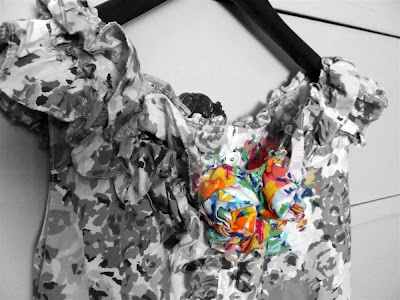 There was also a row of fabric covered buttons that ran down the front that I used on another project a while ago, but I'll share that later.

The first thing I did to that dress was remove the skirt, take off one of the ruffles and add some elastic to the waist so it became a cute little skirt for my girl. Since then the top has been chopped up into smaller and smaller pieces for various other projects, such as this one.

Now on to the outfit.
(I have to apologize for these photos. They're horrible. They were taken right before my daughter had to run out the door to catch the bus, so the lighting was bad and my camera isn't wonderful. Yeah, I'm blaming the lighting and the camera.)

With a little Wonder Under, some zigzag stitching and a little bead detail, this previously boring (and slightly stained) blue shirt is now jazzy and tropical! 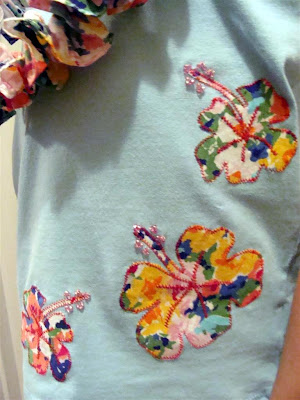 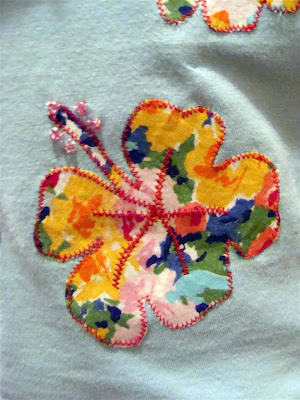 I used 4 of the ruffles from the dress to make a simple fabric lei by just running some string through the center with a needle. 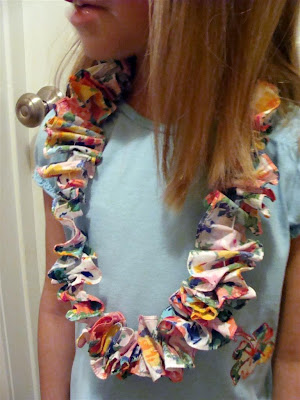 And of course she had to have a "flower" for her hair, so one of the side ties of the dress and some sparkly beads became a rosette that attaches to her hair with an alligator clip. 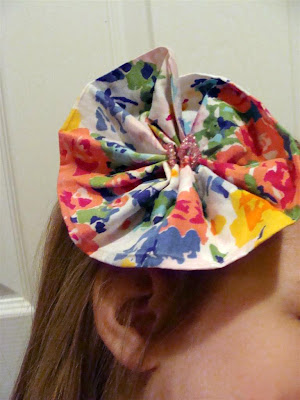 All of these projects were pretty fast and really easy.

My girl was pretty pleased when she woke up this morning with (practically) a costume to wear! 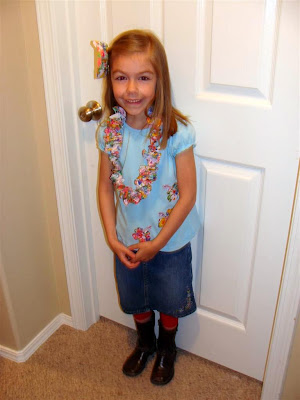 I have to tell you, for some reason when I opened up this post in my reader I thought I was reading a different blog at first. Then as I looked through the post I thought to myself, "I should send this link to Sarah, she would love it." Then I saw who was wearing it all at the end and realized it was your blog. lol.