I thought I'd share a couple of projects that I got to work on this past weekend, even though I had plenty of shoes that I could have spent my time on. It's nice to have something else to do for a couple of days, though, so I ignored the shoe pile and made these instead.

The sweetest gal on the planet (named Sara, coincidentally) contacted me a couple of weeks ago via the most flattering email EVER, politely asking if I might be able to make her coming bundle some "sleep sacks", as I call them. Apparently the ones currently on the market are rather generic looking, especially for boys. I agreed to give it a try and immediately had to make a practice one from some knit fabric I had on hand with a pattern I already owned. It turned out great and didn't take forever, so I was hopeful I could make something similar for her that she'd be happy with. Then she came up with the brilliant idea to send me some of her husband's old tee shirts to use so I wouldn't have to purchase fabric. Awesome!

She sent me five to choose from, 3 of which had collars and one was a graphic tee. All of them were big enough, so I chose the ones that I thought would look cutest on a baby. Here's what resulted: 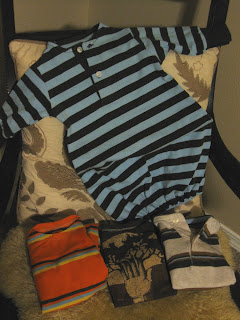 The blue & brown striped one is my favorite, mostly because that color combo is just so dang cute. I cut off the collar and used it to lengthen the sleeves because the sleeves of the original tee weren't quite long enough. The buttons at the neck of that one and the beige striped one were kept in tact, all I did was carefully snip off the collars. The orange striped one was also a collared shirt, but it was longer than the others so I was able to make a plain-collar sack with it.

Another nice thing that worked out well with these is that I was able to use the tee's hem for the elastic casing for most of them (hemming is my LEAST favorite part of sewing), and the hems from the original sleeves as well (except the blue one). I have to say, though, that if I didn't have a serger these wouldn't have turned out quite as nice. All the inside seams are tidy and overlocked, though I did sew everything together with my standard machine, so it can definitely still be done without using a serger.

Anyway, I heard from Sara today and she seems really pleased with her son's new sacks. He'll need to do a little growing before these will fit well, but I'm sure he'll be filling them out in no time! 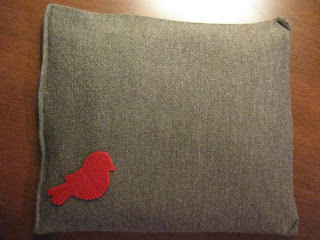 My other weekend project was a spur of the moment idea that actually turned out pretty well also. I grew up in a household where we used fabric "bags" of corn kernels or rice heated in the microwave to soothe sore muscles, aching legs, upset tummies, etc. If anyone asked, "Where's the corn?", we all knew what they were after. Recently my son woke up in the night crying, complaining of hurting legs, so I stitched up a very quick rice bag for him to sleep with. It worked like a charm, but it was u.g.l.y. So, I decided it was time to make a nice one. Out came the wool felted sweaters and I went to town. Here's a great tutorial if you want to make a simple one of your own. And here is another for a more decorative one with a removeable cover (SUPER good idea, in my opinion. This tutorial also has a lovely idea for a flax-filled eye pillow to throw in the fridge or freezer. How great would that be?). I used my own dimensions for the bags and just filled the inside bag with rice until it felt right. *Remember to only use natural fabrics for this project (as mentioned in the tutorial) because these will be going into the microwave and you don't want anything to melt. I used 100% wool felted sweaters for the outer bag and bird, and cotton for the inside bag.

I did add some scented oil to my rice as well, though it wasn't essential oil like the second tutorial suggests. I wasn't sure where to find essential oil around here, and being the impatient crafter that I am, didn't want to have to wait by ordering it online. Instead I found some fragrance oil in Wal-Mart near where the potpourri is (in the home dec section, kind of near the candles). A few sprinkles into the rice, smoosh around in a zip-top freezer bag and voila! Vanilla-scented rice!

I decided to catch the edge of the inside bag in the seam of the outside bag when I sewed it shut in order to keep it from moving around inside the case. Then I stitched the corners of the inside bag to the outside as well for good measure. The bird applique was just to jazz it up a bit. You may recognize him from this little project. (The bird was added before inserting the rice bag and sewing the outer bag closed, by the way- don't leave it 'til last!) 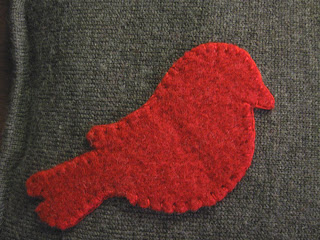 As soon as I'm done typing I'll be giving this guy a whirl. I took a spill yesterday and today I feel like I've been in a car accident. Aches EVERYWHERE. I'm confident this will provide some much needed, if temporary, relief until I can get to the chiropractor.

Yeah, falling at seven months pregnant is a bad, bad idea. Avoid it if at all possible.

is there anything you can't do? those sleep sacks turned out so cute! you are ingenius. i've made rice bags before (christmas gifts last year) but a cover is a great idea.