Before and After: Chair and Dresser/ Sideboard

That's right- yet another thrift store chair make over! Not much wrong with this chair except that it was pretty dirty and had some good sized chunks gouged out of the back. Cute shape, though, so I had to try and make it cute all over. 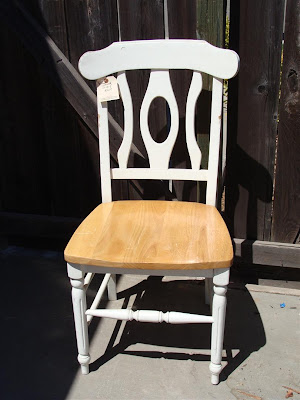 After repairing the gouges I primed and painted the whole thing bright white, then got to work making a cushion for the seat. 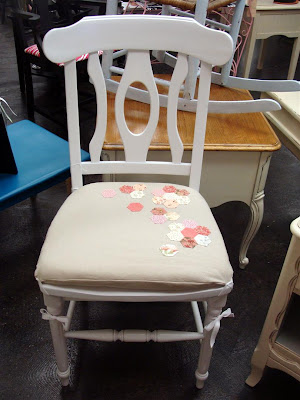 This cushion is attempt #2. The first one was similar but I'd used bright and colorful fabrics for the hexagons. I loved how it looked, but when I sewed it into a cover I wasn't very careful and it didn't turn out looking very nice. 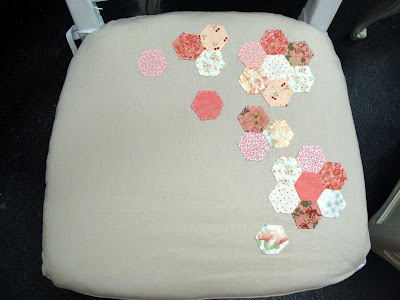 I left it alone for a few days and finally decided that I wasn't happy with it at all and needed to start over. There was no saving it, so I just cut it apart and framed the hexagons in an embroidery hoop. (I'll show you that later.)

For cushion #2 I used these pretty pink and coral hexagons because I'd already made them, and glued and sewed them to some linen that I found in the remnants bin at Joann. 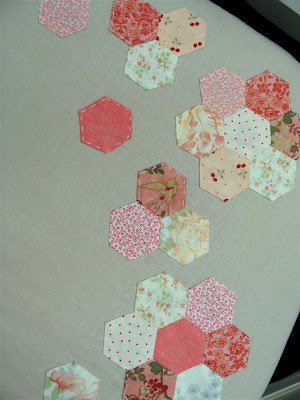 I already had some foam which I cut to size then wrapped in batting. The cover is an envelope-style so it can be taken off and washed. Finally, to keep the cushion from sliding around on the chair, I added cotton twill tape ribbons at all 4 corners and made them extra long so I could tie them around the legs ballet shoe-style. 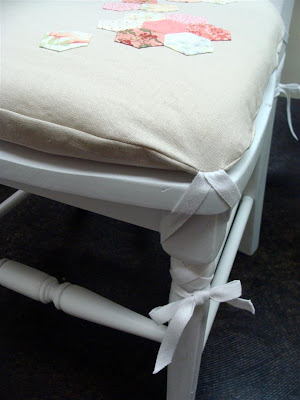 Making hexagons is so relaxing. Definitely going to be doing more with them in the future! 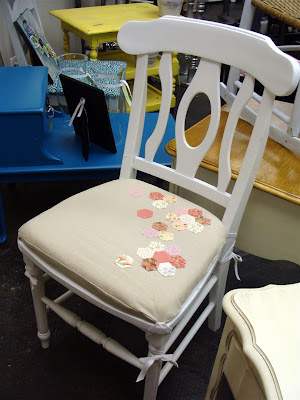 I have to say, it took me a while to decided whether or not to buy this dresser. It was sitting in a thrift store and looked really nice, but I just didn't know what I'd do with it. It doesn't have much detail to it (the drawers are all flat, not even any hardware) and I was just drawing a blank with what I could do to transform it. 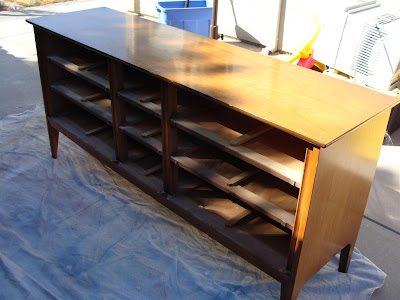 In the end, though, I decided it was just too good to pass up. It was in great shape, but unfortunately when we were loading it into my car the latch that keeps my hatch back closed gouged the snot out of the top when we slid it in upside down. :( 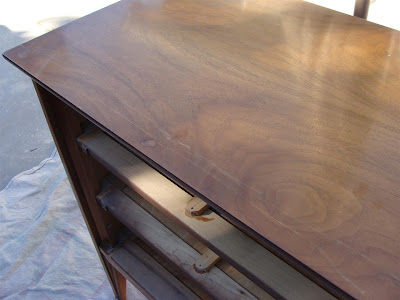 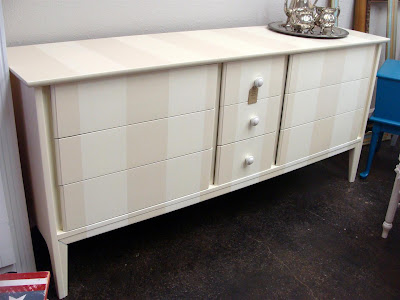 I added some simple white Hobby Lobby knobs to the middle drawers to give it a little more character, but I love the look of the tone-on-tone stripes on this simple, clean-lined dresser. I opted not to distress it, which meant that I got to UBER STRESS about scratching the paint while it was being transported across town to the shop and into my space. I lost track of how many layers of polyurethane I put on it, but that didn't ease my mind much. 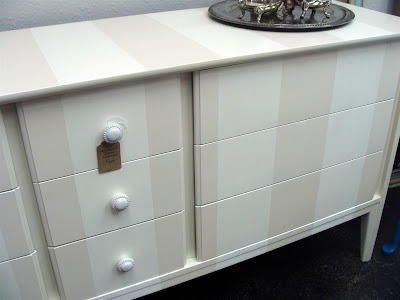 Needless to say it was a huge relief to get it into the space unscathed. However, looking back I probably would've rather done a treatment like this instead. 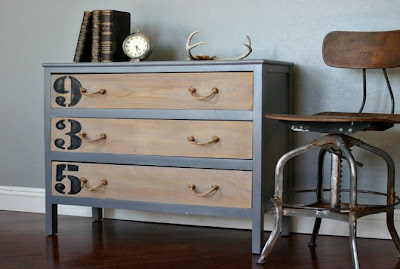 The natural wood drawers were so pretty, but I didn't think about this until it was too late. It would've been cute with the outside painted maybe a distressed blueish green and the drawers left natural maple, no numbers or hardware or anything. Ah well. There will be other dressers- you can believe that!
Posted by Sarah at 9:44 AM

Hi, my name is Kattie and I blog over at perkinswood.blogspot.com. I just started a new weekly series last week sharing inspiration and projects I've seen via pinterest and other blogs. I thought I'd let you know that tomorrow I plan to share your painted rug project. I'll link to your site and make sure it's obvious that it's your work. Please let me know if there are any issues with this. Thank you!

What a gorgeous chair! And I love the dresser too! Have a delightful day, Kellie xx

I love your blog! You combine so many of my favorite things: DIY projects, Goodwill shopping, and furniture. :) I'm busy working on my DIY wedding, but perhaps once that's over next summer I will look to your blog for inspiration on more DIY projects!

So, did the dresser have a finish on the top? I need to redo some really "shot to pieces" dressers in my bedroom. The drawers and sides are all plain wood, but the top has a coating on it that I don't think will come off with sanding. (I wish I knew all the terminology to tell you what it's made of...) Anyway, it looks a lot like the picture you posted. How did you refinish it?