Finally, FINALLY, I have a new(ish) dresser for Pyper! I have been searching Craigslist and thrift stores constantly for months and months in hopes of finding a dresser that's just right for her room. Actually, a few months back I did find one, but the lady up and sold it out from under me before I could get there to pick it up. I cursed her for weeks. Anyway, by some miracle this one didn't get snatched up by anyone else and I brought it home yesterday. Isn't it cute? 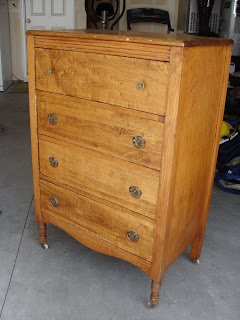 Here's the dresser Pyper has been using for the past few years. It's teeny. It worked at first, but recently her clothes have outgrown it, and now it barely holds her underwear & socks, a few shirts and some pants. The rest end up strewn around her room or in baskets on the floor. It was a bargain wood piece from Ikea that I painted and dolled up with some decoupaged scrapbook paper birds. 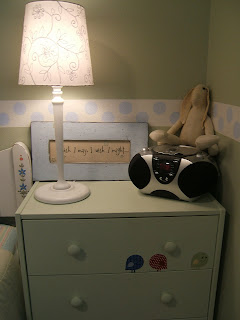 This new(ish) dresser is a great size and is in fantastic condition. In fact, the gal that sold it to me said that she'd wanted to paint it but couldn't bring herself to do it. I can totally understand why- the wood is in such good shape! I've gone back and forth in my mind about whether or not it's a sin to paint over wood that looks this good. And I've come to the conclusion that no, it isn't a sin. Paint can be undone if one (eventually) chooses, and this wood color simply does not suit me or my daughter's decor. Her furniture is all white and she has very colorful bedding. I think as-is, this piece would just look too serious among her other things.

These photos were taken at our previous house after I'd painstakingly painted and decorated her entire room. Then 5 months later we moved, and her room in our rental just isn't quite as cute. *sigh* See the itty bitty dresser in the corner? 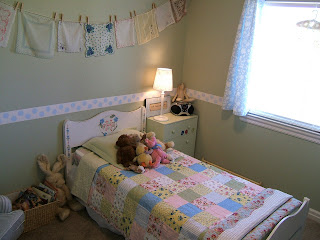 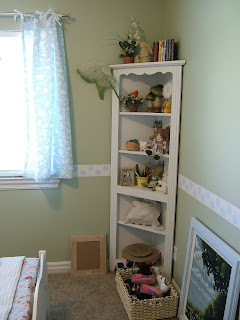 I'm definitely going to have to do this hanky treatment in her room again. It's a great way to fill up a wall that has un-centered furniture on it. 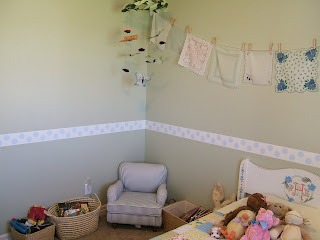 Anyway, back to the new(ish) dresser. Is it annoying that I keep calling it new(ish)? I want to call it new because it's new to me, but because it's an antique it isn't actually new new. Whatever, I'm just going to call it "the new dresser", because soon it's going to look new new. Now the word new sounds weird. Stop saying new.
New.
Haha!
:)

ANYWAY- the hardware on this piece isn't half bad either... 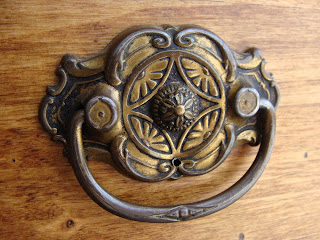 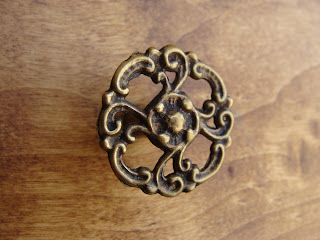 And I love the turned front legs and the cute little wooden casters. Don't you just love furniture that makes it easy to move? 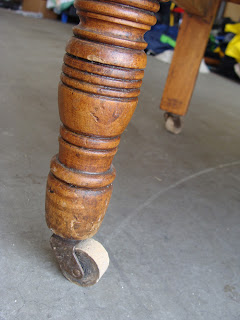 Today while the kids were napping I attacked it with my power sander. Instead of stripping off all the varnish I just went at it with some medium grade sandpaper and scuffed it up reeeeally good. 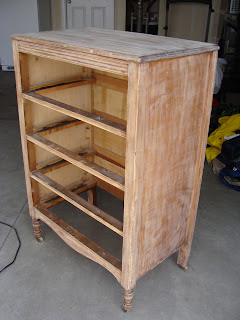 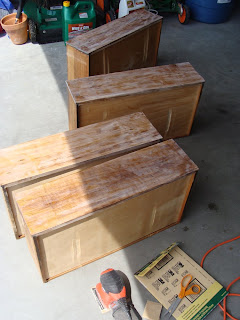 See? Good and scuffed and scratched and dusty. 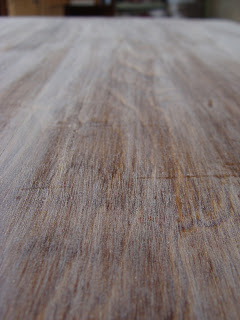 I also went in with just a piece of sandpaper and got into the grooves, the curved sections and the turned legs that the power sander couldn't do. Then I took a damp cloth and wiped it down to get all that dust off. It still looks hazy even after being wiped, so I know I did a good job sanding. Lastly I got out my trusty Dyson and cleaned out the inside of the dresser and all the drawers. 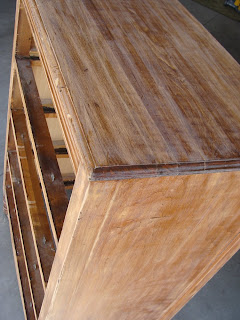 That's as far as I got today. I'm so excited for the next steps- priming and PAINTING! Tonight after tee ball and dinner we went to Home Depot where I picked out a lovely blue (Behr Marina Isle) semi-gloss paint for it. Oooohh, it's gonna be so pretty! My other dresser project is going to have to wait until this one gets done. Pyper needs her new dresser!!!
Posted by Sarah at 10:09 PM